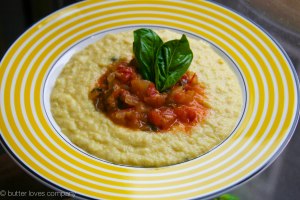 This is an eye-popping dish, the bright yellow polenta served in a pool of red. To turn it into a main course, top with grilled veggie, grilled fish or buffalo mozzarella sliced and finished with ribboned basil. For a dairy-free version of the polenta, use three tablespoons olive oil and omit the butter. The recipe is adapted from Jacques Pepin. We demoed it at U.S. Botanic Garden August 15, 2014.

To roast your own fresh peppers: Cut the pepper in half lengthwise and lay on a cookie sheet, cut side down. Broil for 10-15 minutes until well-charred (this can also be done on an outdoor grill). Transfer roasted peppers to a plastic bag and let them steam in the bag until cool enough to handle. Under running water, remove the skin, seeds and internal white ribs of the peppers. Process peppers in a food processor until pureed; drizzle in the olive and process until incorporated. Season with salt and pepper; reserve.

Remove kernels from corn. Process in food processor until consistency of oatmeal. In a large pan, heat the olive oil over medium heat until it appears shiny; stir in butter until melted. Add the pureed corn kernels and cook, stirring constantly, until thickened and kernels begin to brown slightly on the bottom. Turn off heat and continue stirring vigorously until polenta has reached desired consistency. To serve, divide the red pepper oil onto individual plates; top with a serving of polenta; garnish with basil.

The Cook Sisters on TV